Donald Trump has been famous for his prolific tweeting since the start of his first presidential bid in 2015. He has changed the way politicians communicate with the general public, trying to sideline the “bias filter” of the media. We took a look at a year’s worth of Trump’s tweets last week as part of our news analytics work. Thought we would share with all of you. Feel free to peruse the live dashboard here. Some high level thoughts from my own review of the data. 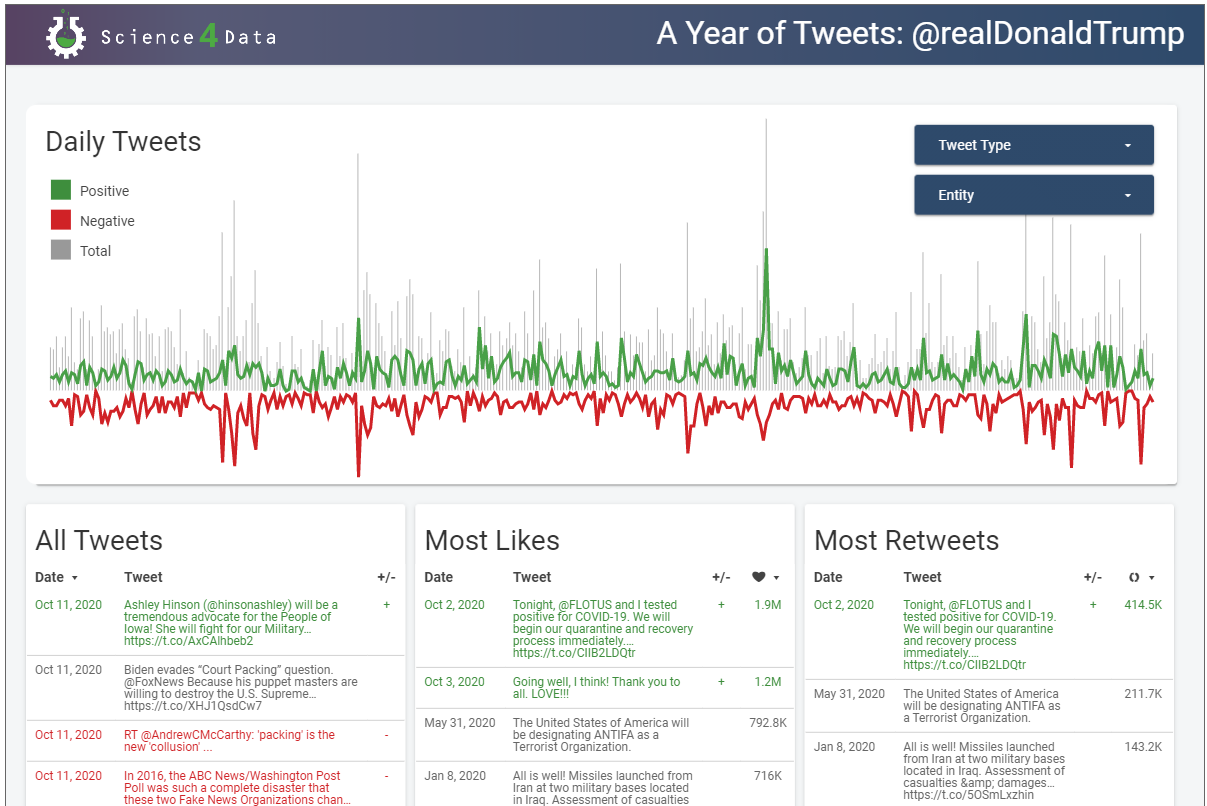 To start with, Trump tweeted 10,441 times in the course of a full calendar year. On some of his peak days, @realDonaldTrump issued as many as 150 tweets. Before we let productivity envy set in, we should keep in mind that he has a full team on this 24/7, managed by Dan Scavino, the White House head of Comms. Given his role, Scavino has been relatively modest towards himself – having @realDonaldTrump retweet his own tweets only 30 times in the calendar year. Pat on the back for that, Dan.

More interesting, our analysis points to Trump’s most popular tweets by likes and retweets. Most popular all year long? The tweet announcing that he and FLOTUS got Covid. Tweets related to Trump’s treatment for Covid dominate the top-5 list for the entire year! Much as Covid dominates sentiment in the capital markets these days, it grabs the most attention here as well.

Also, looking at the most popular hashtags all year – MAGA is by far #1. Then Covid, again as #2, then KAG – the 2020 version of MAGA. If nothing else, Trump’s team understands the importance of consistency of messaging. Keep hammering the same points. Second pat on the back for Dan.

There’s a lot more there. For instance looking at the entities Trump is tweeting about, and the sentiment accorded to each. These entities are ranked by their frequency of mentions. Much could be read into these numbers. Most of it starts to reveal political bias, which we don’t want to exude in our own writing here. Just the analytics and the facts.

If you’d like to take a look at our MediaSignal product for news analytics and monitoring, you can get more information here.